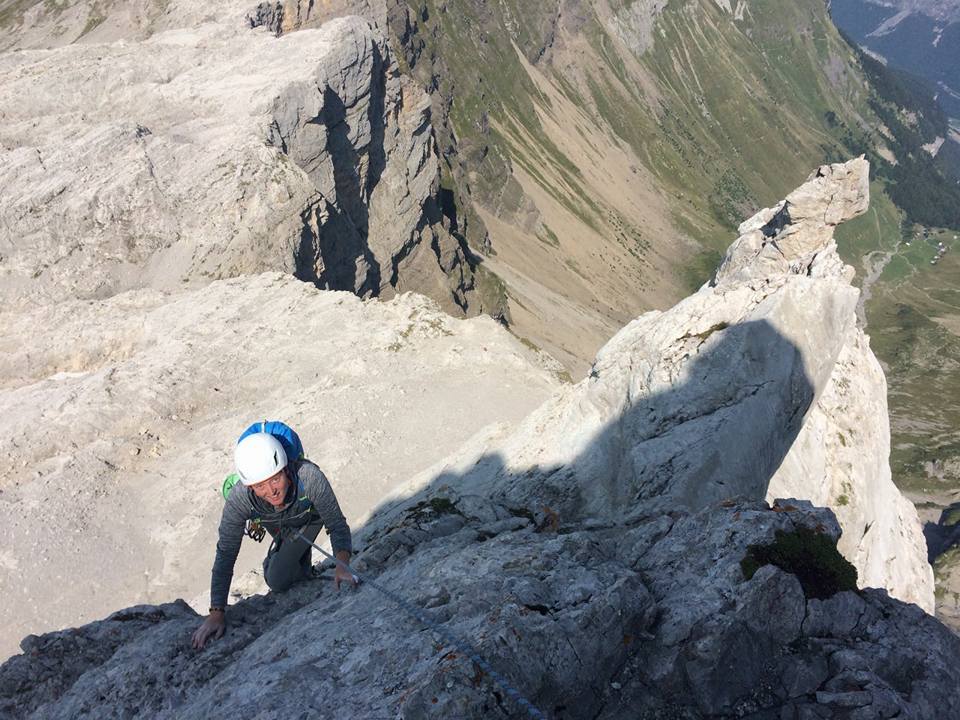 So as with half the posts I write I’m currently sat outside my favourite establishment, Monkey, in Cham Sud.

The view directly in front of me is the Bossons Glacier, and just above that, Mont Blanc. It’s a balmy 20 degrees, and I have a well earnt glass of Rosé next to my laptop, after yesterday’s EPIC adventure.

Olly had an idea a week or so ago, that we should have a full day excursion.

As you well know, in the few previous weeks I had become somewhat nervous about lead climbing. A fear that had been founded by a potentially nasty fall on Cacao Girls.

After a mornings trip to Forestiers (a section of Gaillands at valley level), which further concreted this fear, we had an evening session at Servos, just out of the valley.

Something had clicked a few days earlier, and I set off to lead a route. I hung around for a little bit, but managed to have a word with myself and got the final move.

Previously this summer we had done a small multi pitch, of which the second section is a great little 5b chimney. I had decided I would give it a shot on lead.

Breathing calmly, and talking myself up the whole way, I did it (disco legs included), and I let out a little whoop of joy as I pulled myself over the top to set up the belay.

The weather was looking clear for Friday and as I had no guests in, we decided that was the day.

As it had rained a bit in Chamonix the day before, we decided that there might not be any need to set of super early. So, at 7am, we hit the motorway bags packed, stocked up on food.

After a few dirt track detours thanks to google maps, we eventually parked up at the top of Col des Annes a little after half 8 and set off up the track to base of the climb. Reaching the refuge at around half nine, we stopped for coffee and some breakfast, before heading up across phenomenal structures left after what we could only assume is corrosion from a long-gone glacier, meeting a herd of Ibex along the way and looking across to a cloud covered Lake Geneva.

The first part of the route was basically a (not so well (slings come in handy!)) bolted scramble filled with “ooohh yes” holds and an epic traverse of a ridge. There’s a variation half way up which comprises of a traverse under the Doigt itself, or a chimney route up with an abseil off the top.

We of course decided on the latter, taking in a mini summit, with views of the entire Mont Blanc Massif.

After a small traverse, we hit the ridge. Woah.

On one side, you have a few hundred meters back to footpath, on the other side there is drop down to the floor of another valley. Which you can’t even see. It must have been about 900m minimum. For some reason, however, I had no exposure. The pure thrill of being in such a forbidding environment, and having regained the joy of climbing led to no thoughts of the dreaded “what if”.

After this, we reached the bottom of the final three pitches. This first of which was intimidating.

A 5c vertical wall that turns into a chimney, with no anchor for the belay at the bottom, left us feeling a little exposed. It was well bolted and we scanned the route for moves and bolts higher up. Olly found his psych and he set off.

As I followed up, it felt like all the climbing we had enjoyed (more endured for Olly, with my constant moaning) had led to this moment. The crescendo, finale, the fat lady was singing.

Everything had come together. Months of routes, plans and schemes had lead us here to this moment.

As I led the final pitch to the top, nothing else mattered. The top was within my reach, and I had never felt more alive.

After a brief ridge walk to the summit, we gazed at the views, and the accomplishment dawned on us.

The highest peak in the Chain des Aravis was conquered.

One thought on “Arete du Doigt”